Gender Violence in Crimes Against Humanity in Argentina 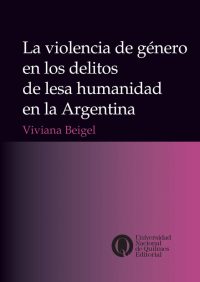 Gender Violence in Crimes Against Humanity in Argentina

The horrors of state terrorism in our country are countless. The sinister cycle of the blackout of human rights left unfading traces, but certain events led, paradoxically, to the initial indecision or negligence of the magistrates in the inaugural cycle of trials for Crimes Against Humanity. This is what happened with the torture inflicted on women, about which I once said that it could not be said that they had suffered more, but that their gender condition had maximized the application of torture, since the executioners, in addition, were invested with patriarchal authorizations . […] This book is situated in the line of the singular contributions to understand the meaning of the sexual affronts to prisoners and also of the paths opened by the gendered perspective in the field of the administration of justice […] The author has made a detailed survey concerning the sufferings of a group of prisoners, focusing especially on the Cuyo area, which increases the value of the contribution. She has endeavored to show that the situation of captivity largely increased the legitimizing license to possess the bodies, that the torturers believed belonged to them. As Viviana Beigel assures, it was a systematic plan whose key is found in the patriarchal domain that conferred, until recently, the safeguard of impunity.

(From the "Prologue" by Dora Barrancos)