In between cacomixtles and koalas. Challenges of intellectual disability 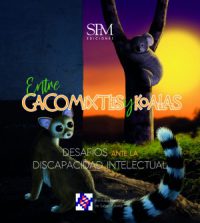 In between cacomixtles and koalas. Challenges of intellectual disability

This book integrates the narrative trilogy created by the publishers of Salud Pública de México in order to address intellectual disability. The three books, titled The parents who wished for a prince but had a Cinderella instead, Children in adult bodies and The forgotten ones with imperfect mentality, published in this order, address disability from the perspective of the parents, of the subjects who suffer from it, and of the health professionals, respectively.
Like the titles selected for each of the three books, the title of this new edition uses metaphoric language. In this sense, In between cacomixtles and koalas. Challenges of intellectual disability expresses a relationship between these two geographically distant animal species that are nevertheless so close because of their huge shared handicaps, which affect their environment. This situation bears resemblances with the social phenomena experienced by individuals with intellectual disability in many countries of Latin America.
Furthermore, both cacomixtles and koalas are latently endangered. On one hand, cacomixtles ––a native species of central Mexico–– suffers from the loss and fragmentation of their habitat, and therefore their survival and well-being are permanently disturbed; human beings, along with domestic species such as dogs and cats, have become their predators and have deprived them of their habitat. On the other hand, koalas are very susceptible to extreme conditions of environmental vulnerability; despite being an iconic species, they face a number of external threats, such as climate change, the reduction of their habitat, diseases, and the susceptibility to be run over by motor vehicles or attacked by dogs. Like these two animal species, people with intellectual disability require official support for the promotion of their optimal development as individuals and as members of their community.
Thus, this book invites the readers to identify intellectual disability as a major public health issue that needs to be recognized in Latin America and addressed through an organized social response in order that those who suffer from it may have the prerogative of an early diagnose and treatment of their comorbidity. It also hopes to contribute to eliminate the population stigmata of discrimination and segregation suffered by people with intellectual disability, and to open the way for their social and labor integration so that they will not have to depend on reductionistic governmental strategies with a charity-based approach.