In the hands of others. Childhood and abandonment in the fifteenth century's Barcelona 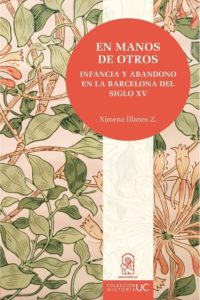 In the hands of others. Childhood and abandonment in the fifteenth century's Barcelona

This book explains how the abandonment of children was like in 15th century’s Barcelona, delving into three essential stages: the scene of abandonment, the care of infants in the hands of wet nurses and learning in someone else’s houses. In each stage the conditions of integration and marginalization, the presence of a female figure and the stories of love and heartbreak are reviewed.

The stories gathered in this book allow us to understand the different dimensions of abandonment, an act that involved not only the exposed infants, but also their environment. The majority of children were abandoned at the doors of the Hospital de la Santa Creu in Barcelona during the less busy hours in order to avoid social judgment. The letters that came with the abandoned infants reflect the drama of poverty and the forced inability of their mothers to assume the role of nurturing.

By reconstructing the context, the reader has the possibility of experiment and empathy exercise that makes sense with the present times. It is inevitable to perceive the harsh realities that persist over time and the almost irreparable suffering caused by loneliness in the first years of life.

“In the Hands of Others” is a book that tells us about a past that seems distant and at the same time questions our present, which is the author’s starting point. The story proposed by Ximena Illanes would not be possible without considering her own sensitivity as a researcher, which became an “excessive interest”, as she points out. Dwell at the foundling records is –again– a problem of our present, linked to the persistence of what we could call a “permanent crisis of childhood.” The moment in which this book is released, is also contemporary with similar situations to those observed by the author centuries ago. Until today, the institutions that have risen up with the mission of watching over and protecting children –which coincidentally belongs to the most abandoned groups of our society– have become places where even the continuity of life is not guaranteed. This book is an invitation to continue a reflection on the importance of care and childhood in our societies. Apparently, the problem of the primordial other –those hands and faces that make up a social body– runs through the history of humanity”. Miguel Morales, The Clinic 09/13/19.