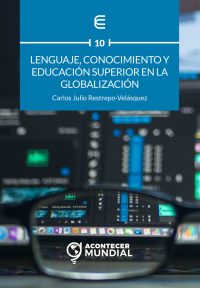 This book offers a vision, rather than a definition, of knowledge; a vision that occurs with exaltation and is experienced during the reading of this book, a bit like the mind works, in an unexpected way. Language, communication, language, speech, geopolitics, economics, science, technology: all of this is the source, cause and effect of knowledge. And, between the lines, a proposal for a transitory definition appears here. At some point in intellectual life, it is possible to believe that we understand what knowledge is. However, this should not be the case, because there will always be something else that completes that understanding —always transitory—, since it is a continuous process. This dynamic has brought us to 2020 with enormous challenges every day. The way certain perverse metaphors are explained, used in everyday conversation, formal expositions and television programs, do not really reveal knowledge, they hide it. This leads us to think self-critically about our use of the word. These metaphors are called impertinent, and the examples are simple, but irrefutable. This is where the difficulty lies in solving simple problems —such as garbage or plastic—, despite the fact that there is knowledge about it. There is too much positivity. The concept of humanities, as a cornerstone of educational quality, which begins with the proposal of the artist Doris Salcedo, is clearly seen in chapter five, in which the key concepts of the Critical Educational Model with a Competency Approach are exposed. It does not stop generating some controversies that could be debated in public, such as the unification of an educational model or its criticism of the consequences of the prosperous and weighted entertainment industry on critical thinking.