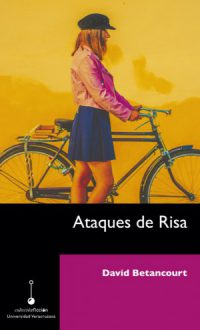 To talk about the history of literature without including humor in it would be inconceivable. From Aristophanes’ comedy plays to the Rabelesian extravagances, humor has found a magnificent pairing with good literature. Kennedy Toole, more recently Junot Díaz, are only two outstanding exponents who have cultivated a top-notch literature filled with humor, sarcasm, and parody. In Colombia, in the current century, David Betancourt, one of the finest contemporary writers in this country, stands out as a great writer who continues and enlivens this wonderful tradition. His stories let the comic, the absurd, and the mockery run along its lines. Betancourt has the facility of storytelling, to catch the reader in a vertiginous prose full of parodies, irony, and unexpected remarks, to endow his characters with an irreverent nerve to graze the wild and, of course, the laughable. It is no accident that the protagonist of the stories in this book is called, precisely, Risa, through whose eyes we know the various characters of her family: her mother, grandmother, friend, grandfather, boyfriends, girlfriends, teachers, and psychologist. There is no page in the book in which the reader does not escape the almost therapeutic urge to writhe in laughter with the occurrences of the reckless and insolent Risa. It is a pride to present this volume of stories by David Betancourt to the reading public. A book to read, reread, laugh, and enjoy, without a doubt; and to be attentive to the future works of this writer.