Life and death of popular Chile 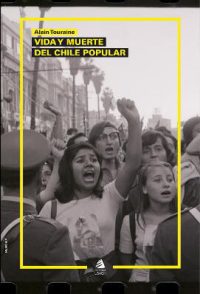 Life and death of popular Chile

This "sociological diary", as its author has defined it, could perfectly well have borne the title of another classic, but of fiction, such as Chronicle of a Death Foretold; here, however, the center of the story is not a fictional character, much less an individual, because it bears witness to the fall of an entire society into the abyss, or at least of one form of it, which its author, Alain Touraine, a prominent French sociologist, has baptized as "the popular Chile". Published in France in 1973, and in Mexico in 1974, Vida y muerte del Chile popular appears – and perhaps is read – for the first time in our country. With an attentive, objective but profound gaze, at once distant and penetrated, Touraine takes notes of his days in Chile during the weeks preceding and following the 1973 coup d'état, leaving a unique record that allows us to understand the greatness and weakness of the Popular Unity, as well as to analyze the fragments left by its resounding fall. In Touraine's own words: "This diary mixes reactions to the events and a non-systematic but continuous analysis of the social classes and the State, the political system and the social movements in Chile […] I did not modify my judgments after writing them, but sometimes I added comments, always dated, in which I discuss a text that I see both as a testimony and as a book in which I continue my reflection on Chile and Latin America, in a spirit of research, successively vivified by solidarity, restlessness and anger".