LONG AND SHORT ARMS OF THE ARGENTINE ARMY 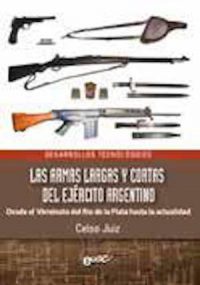 LONG AND SHORT ARMS OF THE ARGENTINE ARMY

In this work the reader will be able to appreciate the chronological evolution of the first firearms. The book presents a chronological account of the first portable infantry weapons developed in Europe that made possible the evolution of portable firearms. Then, the reader is instructed about the first portable weapons used by the Buenos Aires Infantry Regiment, which was a "Veteran Class" infantry unit during the Viceroyalty. Next, the diverse foreign long arms used later by the Argentine Army are developed, happening through the guns and carabinas of retrocarga that manufactured and are made at the moment in the Argentine Republic. World War II looked for a more compact and less powerful cartridge. The answer appears in the nationally manufactured machine guns and their subsequent development.