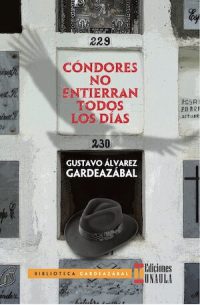 Iconic novel of the necropolis that has been Colombia throughout its history. Even though the main theme of the novel is Violence in the 50s, its main character has such a descriptive force making him one of the must known characters of Latin American literature and cinematography.

Cóndores no entierran todos los días was awarded in 1970, the Premio Ciutat de Manacor (Catalonia), with a panel that was led by the 1967 Nobel Prize in Literature, Miguel Angel Asturias.
1984 Guggenheim Foundation Scholarship.
Casa de las Américas Award (1978), among others.
The Universidad del Valle awarded the author an Honorary Doctorate of Literature (2011).

"Great without having to die, and that in Colombia is an incredible feat . . . Contrary to all journalist principles, he is not after the story. The story finds him, there, in his refuge. His sources consult him and drink from and with him. He possesses privileged information, which surely will not die with him." —Jonathan Titler