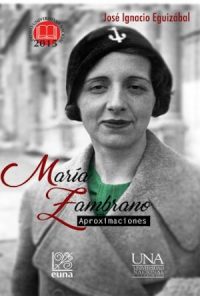 An extraordinary woman of letters. María Zambrano ventured in philosophy and shared closely with other major Spanish philosophers among them Ortega y Gasset and Xavier Zubiri. Her proposal on the philosophical attitude, the questioning and the poetic attitude, by which everything gain meaning, represent the core of her thought. She took part of cultural and philosophical gatherings, journals and circles of intellectuals and was a key character of the Spanish generation of 1930. After almost half a century of exile, living and teaching in Mexico, Puerto Rico and Cuba, upon her return to Spain, Zambrano’s work finally was fully recognized in all its excellence. She was awarded with prizes and a doctorate honoris causa. This book is a philosophical essay that addresses on María Zambrano’s writings and thoughts. The book highlights Zambrano’s stature and in philosophical terms, "her being in the world".