MEDIEVAL HEROES IN A MIRROR. HISTORICAL AND LITERARY CHARACTERS OF THE MIDDLE AGES 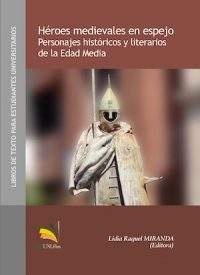 MEDIEVAL HEROES IN A MIRROR. HISTORICAL AND LITERARY CHARACTERS OF THE MIDDLE AGES

The book Medieval Heroes in a Mirror. Historical and literary characters of the Middle Ages analyzes outstanding figures of medieval history and literature, with the purpose of highlighting the discursive crosses between these two disciplines as well as facilitating students of Spanish Literature I (Department of Letters; Human Sciences) the conceptual apprehension of the culture of the Middle Ages through the concrete examples of its social actors. This book is organized into several chapters that focus on certain men and women of Middle Ages history that literature has collected as characters, either because of its relevance (social, political or religious) or its connotations (symbolic, ideological or aesthetic). Each chapter presents the historical character and then focuses on its literary representation.