MEGAPROJECTS, CAPITAL AND RESISTANCE. A LOOK FROM THE URBAN ANTHROPOLOGY PERSPECTIVE. 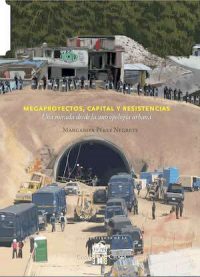 MEGAPROJECTS, CAPITAL AND RESISTANCE. A LOOK FROM THE URBAN ANTHROPOLOGY PERSPECTIVE.

Megaprojects, Capital and Resistance is the result of an anthropological study that explores the way the mechanisms of power perceive the city’s architecture through the objects built in it. Large-scale works constitute this material expression that finds meaning in the logic of global capital accumulation that, according to David Harvey, finds in the urbanization process an ideal vehicle for its implementation. Yet, the city is also a space for the construction of scenarios that represent the specific ways in which different groups confront each other. It is a place where forces are overlapped within a frame of tensions between either uneven powers or powers and resistance.