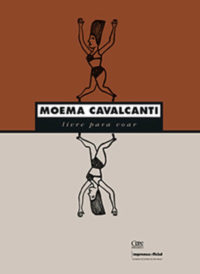 Moema Cavalcanti: Livre para voar is a book structured in two large blocks: the first, with 50 years of her graphic design. The second, which the author calls “Sunday little gifts”, containing excerpts from her diaries, letters, evocations of Recife, through the characters, photographs, graffiti, collages and “cordel”, as well as treats she made for friends and relatives. Revealing her facet of storytelling, with peculiar humor she elaborates lists of last words of historical personalities, classifying them in courageous, optimistic, incredulous, and funny. Moema produced, in her own studio, more than 1,600 book covers for large and small Brazilian publishers, having also dedicated herself to illustrations, countless of them emblematic, for revista Veja. The series of covers that she created for books that derived from the prestigious seminars of Adauto Novaes, published by Companhia das Letras: O olhar, Ética, O desejo, Os sentidos da paixão, made history in the field of graphic arts. She innovated with them, adding a die cut to book covers, providing volumes that allowed oneself to see the other side, the contrasting background of the color she applied to the book flaps. This work, whose graphic project is also by Moema, shows the languages in which the author expressed herself eloquently: materiality, collage, illustrations, photography, and typography. Moema Cavalcanti is one of the most prolific and innovative graphic designers in Brazil.

“Compiling Moema Cavalcanti work – with more than five decades dedicated to combine materiality and form to ideas, and adds layers of meaning to the literary works that motivated its creation – […] is an initiative more than necessary. The initiative results from a partnership between Cepe Editora [from Pernambuco], where the book cover designer was born, and Imprensa Oficial de São Paulo, the state where she built her professional path. […] Moema’s work is a reference to be explored (one of the reasons that make this publication needful) for previous generations, it is an influence to be celebrated and revisited.” Renata Gamelo, Revista Continente, December 2019