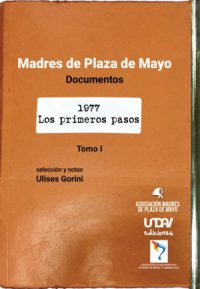 The initial impulse to disseminate the documents that are part of the archive of the Mothers and that gave rise to this book was of the Mothers themselves. In addition to the desire to make them public for memory and history, there is an urgent concern that these documents are not lost after their own and inevitable death, and not only by the action of nature or chance, but for that of his enemies. The archive of the Mothers, like so many archives of the counter-hegemonic movements of the most diverse origins, was always the target of attacks and attempts at destruction, both in the dictatorship and in the post-dictatorship. At present, in the midst of an offensive by the right and the extreme right, these dangers have intensified. Faced with these dangers, then, this publication implies an early rescue, which in addition to protecting the documents, aims to make them common assets of the people. It may seem a utopian gesture. But what, in the history of the Mothers, did not begin with the imprint of the impossible, until the strength of these women transformed and extended the limits of reality.