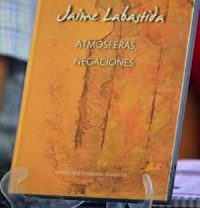 At the beginning of this book, Jaime Labastida warns us about the memorable and already distant reading of an epistle of Captain Francisco de Aldana, in which the young soldier expressed his desire to lay down his arms to devote himself to study and meditation, which he was prevented by death. Fragments of that composition will emerge in the poems of Atmospheres, negations as props to establish a transtemporal dialogue with the ill-fated author about geographies of the ego and the vicissitudes of the poetic office. The reader is confronted with a series of poems that question themselves. The first part’s descriptive passages will be internalized to give way to ontological reflection. In the second half, he questions the veracity of poetic memory, a strategy that makes the statement more complex, as if it had not really happened, would have happened otherwise or was just a dream.