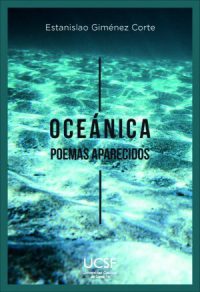 Oceanic. Emerged Poems gathers a series of texts written, forgotten, re-read, and re-written over the years. As an irregular but powerful practice, as lateral to his academic and essayist work, this task was, for Estanislao Giménez Corte, both occasional and persistent. Hence the category that the author coined to describe these verses as emergences: as a voice emerging and finding no channel in any other genre; as a voice “asking for" the poetic form; as a voice not tied to rhyme or structure, but that instinctively seeks synthesis, figures, cadences, and images.
Oceanic is built on the impact of the experiences on the author’s senses and spirit: in its pages there are references to life, children, time, relationships and reflections on the writing profession. These experiences constitute the natural realm of a person who, as in this case and in that of so many others, is “touched” by sensibility (as Whitman would say) and finds the word as the only possible answer.
The verses in this book can be thought of as a hospitable catharsis: a kind of continuation of the character of an author who “invites” his reader to share the bread, a discovery, a moment of happiness, a surprise, a vision, a perception, an insight: something that breaks the daily anomie and, therefore, allows us to see things in a new light, accompanied, in a state of expectation and imagination. A breath of beauty emerging every now and then, but whose true nature is to be shared, at least for a moment, with others.
In the foreword, Susana Ibáñez writes: “Although the poems in Oceanic were written over many years, today they are re-written in the adult author’s re-reading, and re-imagined in the simultaneity of the book. This collection of poems tells of concerns, passions and obsessions that essays, with their calculated reasoning and vocation for order, could not convey. Each poem can be read as a moment of overflow, burst, explosion, as if the underground world of the poet surfaced (….) I feel that the poems (…) evoke, in their rhythms, lands recently visited (…) and, at the same time, tell of volcanic landscapes, abysses, and insomnia that can only be known in this new language of poetry.”