Of love and loathing : marital life, strife, and intimacy in the Colonial Andes, 1750-1825 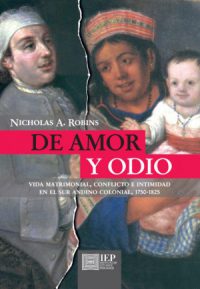 Of love and loathing : marital life, strife, and intimacy in the Colonial Andes, 1750-1825

Based on archival sources, this research examines the application of late colonization policies in relation to marriage, morality and intimacy in the Andes, and how people resisted creating and breaking intimate ties. Such policies highlight the moral, racial and patriarchal ideals of the time and, more importantly, the degree to which they were evaded. A society with high moral flexibility is thus observed despite the predominance of religious doctrine and royal edicts. In that sense, free unions, illegitimate children and de facto divorces abounded.
Policies related to marriage, morality and intimacy were fundamental to the efforts of the Bourbon crown to maintain the patriarchal social system based on castes. Intimacy became a point of social support, controversial for individuals, families, the State and the Catholic Church, where deeply personal emotions and experiences reluctantly transformed into social, political and moral challenges. Intimacy was not simply a barometer of colonial social norms, but it reflected the agency of women, an increasingly assertive State, a weakened and alienated Church, an incipient social mobility and a large population of itinerant men. Marriages, love relationships, spousal abuse and the possibility of divorce were inevitably, and often tragically, shaped by these dynamics. Personal narratives and private correspondence allow readers to enter the internal sanctuaries of the colonial world, empathize with the protagonists and, more importantly, understand the economic, social, political, religious and globally-economic context in which their struggles took place. These are stories of passion, forbidden love, clandestine marriages, family discords, betrayals, horrendous abuses and informal divorces.