Past/Present: Disputes of Meaning. Debates in History, Memory and Communication 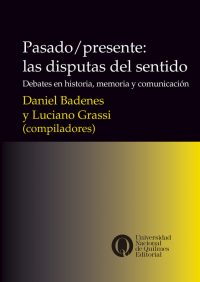 Past/Present: Disputes of Meaning. Debates in History, Memory and Communication

The cracks of recent Argentine history; dilemmas in representation; the processes of memory, truth and justice; the challenges of building sites and archives; the updating of the struggles for human rights and sovereignty marked the debates over twelve years in the sessions on History, Memory and Communication held at the Universidad Nacional de Quilmes since 2009.

Past/present… collects this thematic agenda and presents the contributions of researchers from different disciplines, who underline the validity of studies on memories both in their historical key and in their unavoidable political present. As Kaufman points out: “Regarding the origin of what concerns us, also vulnerable to oblivion, it is convenient to return, as is inevitable because it always breaks out again, to the testimonial root of the problem of memory, to the genealogy that accounts for of its origin […]. This is one of the categorical features of the problem of memory: 'never again' means always starting over as long as we don't want the horror to repeat itself."