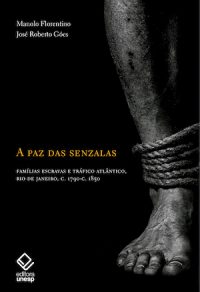 A study grounded in the history of the anonymous and their immediate social relationships, dismantles myths about slavery in Brazil. Two scholars take as their point of departure the “History of Private Life,” in order to recover new aspects of marriage and family relationships among Brazilian slaves. For many decades, it was believed that family relationships among slaves were either non-existent or trivial, since the slave quarters were a focus of random promiscuity. Jean-Baptiste Debret, in his famous Viagem histórica e pitoresca ao Brasil (A Historic and Picturesque Voyage to Brazil), wrote that in the plantations “one female slave was normally provided for four men.” Manolo Florentino e José Roberto Pinto de Góes break down these and other myths. Florentino and Góes make it clear that their book grew out of a phase of more recent historical knowledge in which the simple existence of family relationships can no longer be doubted.