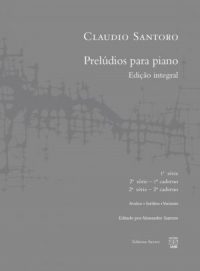 On the eve of the birth centenary of Brazilian composer Claudio Santoro (1919-1989), one of the greatest names of Brazilian music, we present, for the first time in one volume, the full edition of all his piano preludes. Critically revised by Claudio Santoro’s son, the pianist Alessandro Santoro, currently responsible for the composer’s material and virtual collection, this edition covers all preludes ever published in his lifetime, adding omitted variants and works, correcting old readings and including unpublished works in a modern edition in Urtext format. It has also been included an introduction, a thematic index, details about the editorial process, biographical information about the composer and a chronological index of the works. The book is recommended to pianists, musicians, researchers, academics and to everyone who loves Brazilian classical music. "Amongst the ignorance and indifference of the world, he persisted in cutting his dazzling diamonds, with perfect knowledge of his mining." Igor Stravinsky coined this sentence, to express his late astonishment to Anton Webern’s music. A paraphrase of this statement would be perfectly suitable to Claudio Santoro’s Preludes. As in the case of Webern’s work, these short pieces by Santoro bring a powerful compilation of expressive materials, which make precious gems of them. Featuring not widely known works over decades, even during the composer’s lifetime, the unabridged edition of Preludes brings to light a cohesive and inspired set of short distinguished pieces that abound with inventiveness. It is not unrealistic to predict that soon they will become the favourite for pianists, so direct and effective is their communication. Beyond their intrinsic excellence, these Preludes are a guide to understand Santoro’s work as a whole. Composed over decades, encompassing the various phases of the composer’s work and reflecting the changes in style throughout his career, these pieces can be seen as a sketchbook for greater works, such as the preliminary drawings that painters sketch for larger frames. This edition, beyond being useful for pianists, will represent a map of the mine for everyone who is interested in rescuing from oblivion relevant parts from the work of one of the leading composers of Brazilian music.