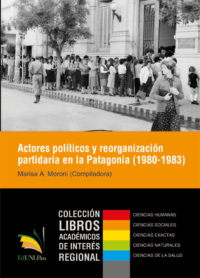 Along the last decade, the period between the last years of the civic-military dictatorship and the first democratic elections of 1983 began to be part of the academic agenda, thus enriching research topics about the recent past in Argentina. The studies that compose this volume result from work carried out within the framework of the Socio-Historical Studies on Democracy Network, which is integrated by researchers from UNLPam, UNCO, UNPSJB and UNPA. The purpose is to contribute, from a subnational perspective, to the analysis of the so called transition to democracy. The book is inscribed in a line of research which reflects, from a historical and political perspective, on democracy in Patagonia, a political conglomerate of late incorporation to the national community, showing an inner dynamics marked by a long citizenship exclusion and inclusion cycle which goes beyond the transition phase from an authoritarian to a democratic regime, and also provides a regional identity matrix which, at the same time, makes it more complex and diversifies the general outlook on the period.

The book is organized in two parts and eight chapters which go from the period between the first call from the military forces towards a political opening, through the rupture which the Malvinas war meant, and until the call for general elections in October 1983. From a socio-historical approach, the different chapters problematize the political transformations and the logic that the Patagonia provinces forwarded to account for the particular traits of the process of leaving behind the authoritarian regime and connecting with current continuities and preoccupations about the democratization of the political regime. All in all, and in an articulated manner, this volume identifies the political as well as the parties strategies used to mediate between the interests and expectations of the protagonists of the post-dictatorship political and social project in the provinces of La Pampa, Neuquén, Río Negro and Chubut.