POLITICS AND HAPPINESS: FRAGMENTARY ANALYSIS OF A VERSION ABOUT THE IMPOSSIBLE 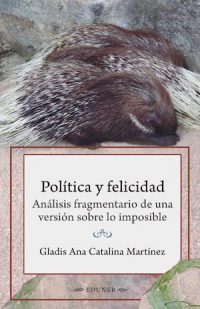 POLITICS AND HAPPINESS: FRAGMENTARY ANALYSIS OF A VERSION ABOUT THE IMPOSSIBLE

Politics and happiness enjoy a conflicting relationship, the author states, while warning that the presentation of the relationship as impossible is a “version”. The porcupine`s dilemma develops the idea that these, when facing the cold, have to find an optimal distance to keep themselves warm without being hurt. Gladis Martínez picks up this formulation when she refers to the “drama", to which the relationship between politics and happiness is convened, enclosing it in the porcupine`s struggle which, in order to avoid a liaison conflict, make it impossible”. This analysis is the core of the work in which Eduardo Rinesi highlights three aspects: the wide range of the task that has been carried out (following most of the western thought); the author’s success when explaining why the relationship between politics and happiness did not have a more prominent place in the history of our ideas; and the originality of making psychoanalysis visit "in a questioning and critical way" other discourses (those coming from political theory and political philosophy).