POPULISM ON STAGE. WHY DOES IT EMERGE IN SOME COUNTRIES BUT NOT IN OTHERS? 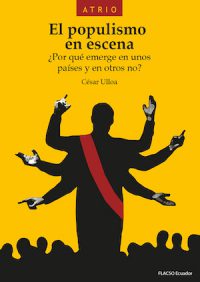 POPULISM ON STAGE. WHY DOES IT EMERGE IN SOME COUNTRIES BUT NOT IN OTHERS?

This book opens up, once more, the debate on this political phenomenon which is not exclusive from Ecuador but is more accentuated in this country than others in Latin America, appearing as if it were an element of Ecuadorean identity since its constitution as a republic. Differing from other studies, this book compares the situation of Ecuador with those in Venezuela and Uruguay explaining why does populism emerge in Ecuador and Venezuela but not in Uruguay. To determine populism causes, César Ulloa performs a deep analysis of the role that the elements of the political system have played in this three countries. His reflection originates when these countries shifted back to democracy. He reflects on the institutions, the political parties, the rules of the game, the relationship between the state power, democracy and political culture of population.