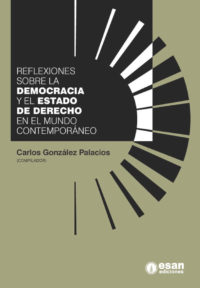 This work represents an important compilation and translation effort of eleven research papers by German, French and Peruvian jurists on democracy and the rule of law, a classic binomial of public law that is extremely topical for countries that are in full consolidation of your rights system.

Democracy, and more broadly the rule of law, guarantee the widest possible sphere of individual freedom. However, since the appearance of Human Rights at the end of the 18th century, until the advent of the theory of the rule of law at the beginning of the 20th century, the conception of the needs of the individual has evolved, which is accentuated with social changes paradigmatic events that occurred during the 20th century. In this sense, the rule of law no longer resides only in freedom as the only constitutive element of well-being, but it is necessary to dwell on the causes of the non-realization of certain projects of the democratic State, despite the existence of freedoms, in order to reflect on the new parameters that must be considered in order to improve the rule of law.

The contributions presented here are grouped into four sections. Some works interrelate the concepts of the rule of law and democracy with the classic scheme of fundamental rights or with the logics of the social state of law. Through a comparative study of constitutional law and international or regional law, other works analyze some concrete examples such as the fight against corruption and states of emergency.