Rules and Transgression:Women and their Families in the Cities of Cartagena de Indias and Havana (1759-1808) 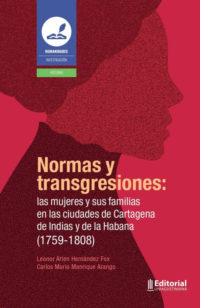 Rules and Transgression:Women and their Families in the Cities of Cartagena de Indias and Havana (1759-1808)

This research studies the norms and transgressions that occurred in family life, especially women ́s, in Cartagena de Indias and Havana, the main port cities of the Caribbean alongside Veracruz and Portobelo, between 1759 and 1808. The authors consulted a wide range of sources, among other institutions, in the General Archive of the Indies in Spain, the General Archive of the Nation in Colombia and the National Archive of Cuba, and they applied the historical criticism method. This made possible to demonstrate that the legislation and speeches produced by Enlightened Despotism in order to control family life reinforced patriarchal regulations, aimed at consolidating female subordination in front of the authority of men. This generated multiple conflictive and transgressive situations, in which women assumed a leading role as a valid alternative for the defense of their rights.