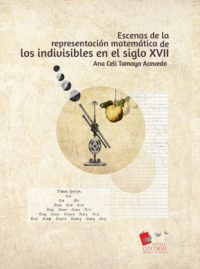 The mathematical indivisibles theory, in which the comprehension and use of the infinite and the continuous is essential, emerged in the beginnings of the XVIIth century, after a large European gestation that took place in the late Middle Ages. Among the many things that were written about the indivisibles of yore, this book limits itself to study some of the main works by Bonaventura Cavalieri, Pietro Mengoli, Blas Pascal and Gilles Personne of Roberval. Concretely, here are presented and analyzed with a certain amount of detail not only the mathematical ideas as they appear in the original texts, but also their cultural context with tools from Hermeneutics, Conceptual History and sciences (Social and cultural and epistemology). The analysis is performed with the conscientious purpose of avoiding the traditional prejudice that remarks the mathematical indivisibles as a mere precursor of infinitesimal calculus and intending to restore the place and historical and mathematical values propper to these theories. Indeed, the indivisibles theories successfully solved very important problems back in their day: the determination of the gravity centre, the computation of quadratures and curvature of the geometrical figures.