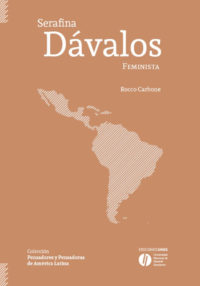 With this volume, this collection publishes its first book on a Latin American thinker. Rocco Carbone explores the thought of this doctor in Law who postulates legal equality between men and women through a reading, which we could call Rancièrian, of the Constitution. After the Guasu War, Paraguay had become a country of women, but not of women, who continued to be foreigners in their land, excluded from power and citizenship. Serafina Dávalos understands patriarchy as anti-humanism, addresses the role of women with criticism of marriage, motherhood and the fashion system, and outlines an action plan for social change with an emphasis on education. Today it is claimed by feminist, lesbian and human rights groups.