Source of All Reason and Justice. Religious Liberty and Church-State Relations in Argentine Constitutional Law 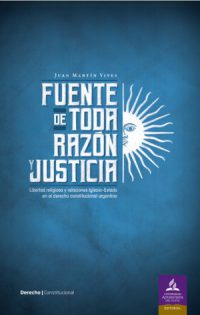 Source of All Reason and Justice. Religious Liberty and Church-State Relations in Argentine Constitutional Law

Is it true that in Argentina there is a broadest religious liberty? The Argentine State, is confessional or secular? Does the National Constitution establish any official church? How is it to be interpreted the constitutional command of supporting the Roman Catholic faith? Can religious liberty exist without religious equality?
The above questions have been asked and answered many times. This book, however, aspires to do it from a different perspective. It focuses mainly in the status of religious minorities, those churches and faith communities different from the majority church. Despite their proportion and influence in Argentine society have not ceased to increase, religious minorities continue to be ignored in the text of the Constitution as well as in much of the bibliography focused on the study of the relationship of constitutional law with religion.