SOUTH OF ALMOST EVERYTHING. HUMBERTO COSTANTINI AND HIS WORK 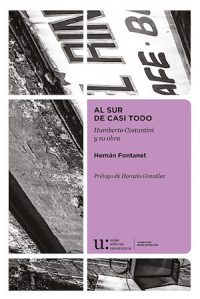 SOUTH OF ALMOST EVERYTHING. HUMBERTO COSTANTINI AND HIS WORK

Humberto Costantini’s name wandered the neighborhoods of Buenos Aires in the sixties and seventies with a poetic air, its epicenter being an almost peripheral area of the city with no apparent literary traces—Villa Pueyrredón. Like Urondo, Conti, and Gelman, Costantini belongs to a generation of Argentine poets and narrators who expose social allegories by rubbing their lamp with a mixture of images that went without respite from the great epic to the loving daily routine. But Costantini who, for the reasons explained by Hernán Fontanet, is fully involved with all of them, needed the push of a scholar to review all the ramifications of his work, his roots well down into the city, being even a veterinarian by profession, but later taking the path of a pilgrim in an exile that is at the same time a source of lament and creation. From the prologue by Horacio González.