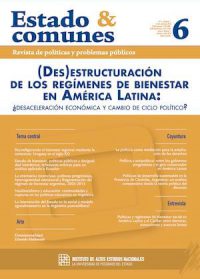 By the end of the 1990s and in one of the most unequal and inequitable regions of the world, a left and centre-left ideological and political cycle had taken in order to contain and prevent social risks to which the region had historically been used to it. Since then, and as well as the historical development, strategies and results were not uniform in each of the countries that experienced it. In the midst of a rather turbulent political and electoral scenario, which heralds the arrival of the right, coupled with the decline of raw material prices and the circumstances of international markets, it is likely that we are facing a reconfiguration of social welfare schemes, or perhaps, a depletion of left-wing models. The journal State & Commons has brought this Latin American and Caribbean reality to debate and considers it relevant to the international community, academics and civil society in general.