Stories of Rebellion and Punishment. Abortion in Ecuador during the First Half of the 20th Century 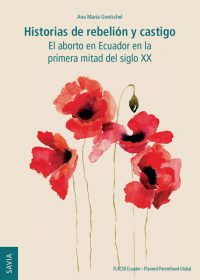 Stories of Rebellion and Punishment. Abortion in Ecuador during the First Half of the 20th Century

In this fascinating journey through the archives from mid-19th century through the first half of the 20th, Ana María Goetschel recovers the history of abortion in Ecuador to bring us cases and the major legal, medical, political, religious, and moral debates of the time. The author discovers that, from the beginning of the Republic, women who underwent and provided abortions were subject to penal consequences but that few were tried or jailed because most cases were resolved in the domestic sphere.

It was only with the application of the Comprehensive Penal Code of 2014 that women, especially the poorest who went to public hospitals, faced legal consequences and even jail for making decisions about their bodies. Now, well into the 21st century, legal, religious, and hegemonic masculine political power continue to define the reproductive destiny of women and their lives, though, thanks to the constant efforts of the women´s movement, little by little this crime is being removed from Ecuador’s Penal Code.

An indispensable work, a way of repaying the debt with the past, and a huge contribution to current processes in which Ecuadorian feminists proceed firmly toward personal autonomy and the utopia of complete reproductive freedom, the right to make sovereign decisions in any and all circumstances and not only in cases of rape.