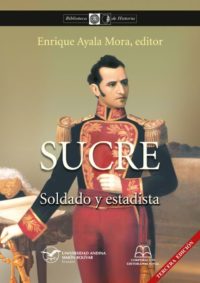 Despite being one of the most prominent figures of American Independence, Marshal Sucre is still relatively unknown. This book, the first of its kind, is an effort of comparative analysis about both Ayacucho hero’s warlike and political actions, and about his ideas and his private life. It is not a panegyric, but a critical exercise on Bolivar’s main Lieutenant, his military prowess and his dimension as a statesman and thinker in the process of the formation of our States.
Sucre’s participation in the liberation campaigns of Venezuela, New Granada, Quito, and Peru; the founding and organization of the Bolivian Republic; relations with Bolivar and other leaders of the emancipation movement; his murder, committed in Berruecos, and the consequences for the political future of Greater Colombia, are some of the aspects discussed this book.
This book makes it clear that it is possible to approach old issues from new perspectives. It is easy-to-read and will interest people who want to know more about the processes of the past, its protagonists and consequences. The authors are specialists in each of their subjects and have opened an unprecedented path for the research of our nations’ origins. This is the third edition that appears after several reprints in Quito and Bogotá.