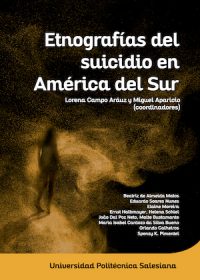 Suicide is a latent problem in the American continent, which engenders concern and raises several questions. Though the subject has been dealt with primarily in the field of health care, there have been important interdisciplinarial efforts in order to understand its complexities and its sociocultural varieties. It is in this aspect that the ethnographical records in regard to it become valuable contributions, in order to enrich this line of investigation starting from Southamerican anthopology. Ethnographies of Suicide in Southamerica presents twelve anthropological reflections about cases of suicide in this side of the continent. Each of them shows different interpretations and senses given to self induced death in different regions of the Amazon and the Andes. The texts are presented in the native language written by the authors, some of them in Portuguese and others in Spanish in view of preserving the linguistical expressions of each tale.