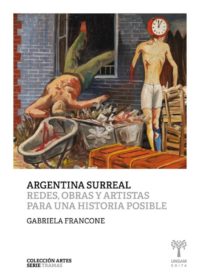 Surrealism displayed a powerful gravitational force. It encouraged new ways of perceiving and imagining the world in a context full of war conflicts and with the advance of fascism. How did its ideas traveled? What were its drifts? What did this avant-garde represent for those who embraced its promises?
In the Argentine visual arts, the inaugural episodes of surrealism did not receive the attention that other avant-gardes did. They were marked by negative evaluations, both from the modernist perspective and from the demands of an aesthetically and politically radicalized field.
This book faces its delayed recapitulation and presents the protagonists: Aldo Pellegrini, Antonio Berni and Juan Batlle Planas. It analyzes the scenarios and motivations that gravitated in the appropriation of surrealism in Argentina during the inter-war period.
For them, surrealism represented a libertarian aesthetic, the possibility of revealing an unsuspected potential in mankind. It was a blazon of insurgency and nonconformity.