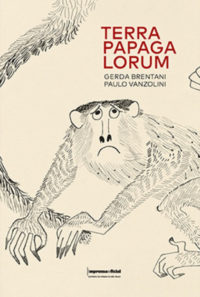 Terra Papagalorum, title in Latin conceived by Paulo Vanzolini, went through 40 years until being printed. Emeritus zoologist, having created the Theory of Refuges, he knew as a few the species he collected, dissected and classified. In his practice and scientific expeditions he had the habit of being accompanied by visual artists, with whom he has lived since the famous Bohemian caravans of the Faculdade de Direito do Largo São Francisco: along with Aldemir Martins, Otávio Araújo, Marcelo Grassmann, Carybé, Arnaldo Pedroso d’Horta, José Cláudio da Silva and Gerda Brentani. In this book, there is a particularity: Vanzolini texts, translated into English by himself, although having a scientific basis derived from his profession, are characterized more by concise and subtle chronicles, in which there is a little bit of everything, since the character of a given animal until the best way to cook it. He also evokes the popular songbook, great composer he was, collecting verses among “sertanejos” or riverside dwellers. Gerda Brentani was not intimidated, and as music and lyrics partners, she designed and illustrated this universe at her best. With perfection, in pen and nankin, master of drawing, she dominates this varied fauna, personalizes its protagonists, gives to many a human character, either by the look or the posture. Her artistic work shows the animal’s anatomy. A book that does not fit into categories, it brings together art, science, and literature by focusing on the country’s old inhabitants, typically South American animals, purely ours.

Paulo Vanzolini was honored with the Grã-Cruz da Ordem Nacional do Mérito Científico. In August 2008, he was awarded by the Guggenheim Foundation, in New York, by virtue of his contributions to the progress of Science – the same award was given only to three other Brazilian scientists, in other areas other than biology. In March 2013, he received the APCA (Associação Paulista de Críticos de Arte) Prize for lifetime achievement. In December 2010, Vanzolini was promoted to Grand Official of the Ipiranga Order.

Gerda Brentani was awarded at the International Caricature Competition in Bordighera, Italy (1958).

“Terra papagalorum compiles drawings of animals by the Italian artist Gerda Brentani for which zoologist and composer Paulo Vanzolini later wrote short texts. In her ink traces, she reveals animals with so many personalities that they establish a dialogue with us, an exchange with their familiar looks and expressions. These drawings, which, by themselves, already speak so much, come to life even more with the descriptions […] written by Vanzolini and which completely escape the rigor of scientific classifications, even though they bring us unknown information and curiosities.” Mariana Oliveira, Revista Continente, May 2020