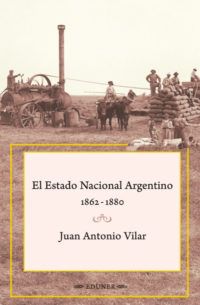 This book shows us the twenty founding years of the organization of the Argentine National State. After the federal defeat, the stage of internal struggles is closed. The organization of the country starts focused on Buenos Aires, unitary and liberal centralism. There are relevant events in bordering countries; the defeat of the white party in Uruguay and the War of the Triple Alliance. Meanwhile, in Argentina some other important affairs are being organized: the installation of railways, the extermination of aboriginal population and the expansion of borders, which trace some of the features of a capitalist nation-state, producer of raw materials, dependent on demand and foreign capital. Juan Antonio Vilar invites us to explore the formation of the Argentine National State through these pages and thus learn about the mistakes and successes of a period when the political, economic and sociocultural features began and, a century and a half later, still exist in our country.