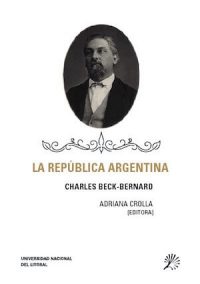 The Argentine Republic was published by Charles Beck-Bernard in Lausana (Switzerland) one year after his return from Argentina, after living in Santa Fe between 1857 and 1864 with his wife, Lina Beck-Bernard. He collaborated with Aarón Castellanos by helping the first families to settle in Esperanza and founded in 1858 a model colony, San Carlos; this promoted the arrival of the settlers and exercised his responsibility in situ as director of the colonization company Beck & Herzog. Also, he had a prominent role in the social and political life of Santa Fe. In 1864, President Mitre recognized his services and named him as an Immigration Agent, and in 1868 Argentine Consul in Switzerland, a position he held for twenty years. Despite it has been 150 years since the publication, it is inexplicable that, in spite of the importance of its figure in the colonizing process, it could not be read in Spanish.