THE END OF THE WORLD. POPE FRANCIS’ PHENOMENON FROM A SOCIOLOGICAL PERSPECTIVE 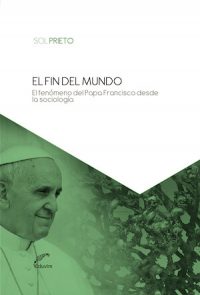 THE END OF THE WORLD. POPE FRANCIS’ PHENOMENON FROM A SOCIOLOGICAL PERSPECTIVE

The announcement of a new pontiff in St. Peter’s Square is always a political event that affects Western society. The election of a non-European Pope -that is, from Latin America- for the first time in the Vatican history makes us rethink the political analysis categories we should work with when approaching the geopolitical (religious and cultural) strategy of Rome. Why cardinals chose Argentine Jorge Mario Bergoglio to sit in the Chair of St. Peter? Which are the challenges and the concrete answers that Francis must face, and which are the limits of his concrete action? How Catholicism reinvents itself in light of the challenges that modern age poses? How the map of Catholicism is changed in Western society, and especially in the new continent? These and other questions are originally and brightly approached by Sol Prieto in a book that examines the Pope that came from the end of the world.