The green wall. Urbanism and ecology in times of dictatorship in Greater Buenos Aires (1976-1983) 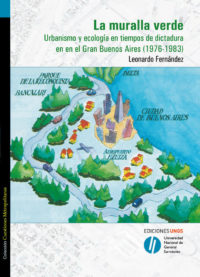 The green wall. Urbanism and ecology in times of dictatorship in Greater Buenos Aires (1976-1983)

Is it possible to relate the city and the dictatorship? This book gathers stories about politics in the urban space of Buenos Aires and its metropolitan region carried out during the self-proclaimed National Reorganization Process (1976-1983). It analyzes issues such as green areas, circulation, garbage and, in general, land use planning. Policies intervene in the urban environment through a plan, a limit, a trace, under different types of conceptions of society. The “public cleaning, the ordering of the traffic and the beautification of the city” have connotations linked to institutional, economic and social interests. In fact, drastic measures of the state apparatus were installed in Buenos Aires and its region with the deployment of certain devices (linguistic, institutional and material) focused on the process of building the city. The book begins with an analysis of the context in which these projects related to urbanism and ecology enter the metropolitan political scene. Subsequent chapters address a multiplicity of experiences and conflicts that disrupt its implementation.