THE GUITAR IN LATIN AMERICA. PERCUSSIVE SOUNDS IN 20TH-CENTURY MUSIC 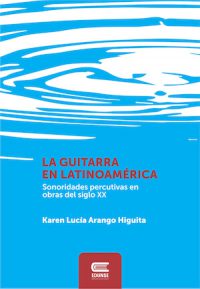 THE GUITAR IN LATIN AMERICA. PERCUSSIVE SOUNDS IN 20TH-CENTURY MUSIC

In this book, the percussive-fingerstyle guitar in Latin America, an interpretative analysis of six 20th-century works, the Colombian guitarist Karen Arango presents several works that reflect the rhythmic richness of Latin American repertoire on guitar, both intense and close to body movement for its relationship with folk dance. She not only analyzes the musicians’ quest for aesthetics which leads them to incorporate rhythmic effects, but also discovers their intentionality and describes the context in which such works were created and the environment in which the composer’s careers developed. Karen Arango’s maturity as an interpreter, her great talent and musical intuition, her deep and multi-faceted knowledge of the guitar techniques, together with a personality filled with care, dedication and passion that adds to the virtues of this Latin American artist are reflected and combined in this work, giving birth to an important source of reference.