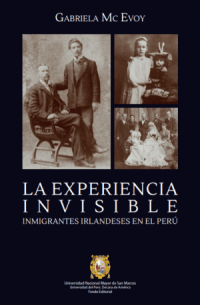 In this book, by studying a variety of primary sources, such as personal correspondence, wills and birth, marriage and death certificates, Gabriela Mc Evoy postulates that Irish immigration to Peru in the mid-19th century was part of the capitalist expansion in the New World. In that regard, the author focuses on some of the most representative examples of the different aspects of immigration: on one hand, examines the lives of the workers and peasants who remained anonymous and who were part of one of the first migration projects; and on the other, studies the biographies of successful Irish characters like John Patrick Gallagher O’Connor and William Russell Grace, who —soon after arriving to Peru— successfully entered the commercial and professional world. Thus, in trying to recover the voices of the Irish immigrant, part of the story of men and women who imprinted their culture on the national view and who contributed to the construction of Peruvian diversity is reconstructed.