THE ONLY POSSIBLE LIFE: ITINERARIES OF ERMANNO STRADELLI IN AMAZONIA 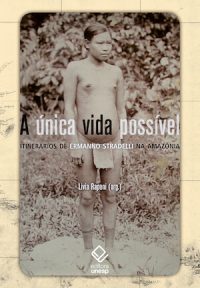 THE ONLY POSSIBLE LIFE: ITINERARIES OF ERMANNO STRADELLI IN AMAZONIA

A collection of texts that illustrates the various profiles and performances of Ermanno Stradelli, who played in the 19th and 20th centuries a delicate role of interpreter and revealer of the indigenous Amazonian cultures. Such a film-worthy screenplay has as main character Stradelli, who crossed the Atlantic with his numerous refined practices of European worship to immerse himself in the passionate and sinuous depths of the Amazonia rainforest in 1879. One of the most emblematic characters of the Italian-Brazilian scientific world of the last century, Stradelli, between the nineteenth and twentieth centuries, studied and recorded in photos, maps and dictionaries, indigenous peoples, languages and the geography of Amazonia. This work enabled Brazilian and Italian publics to know the peculiarities of the region. The book also has a selection of photographs and maps made by the traveler from the archives of the Italian Geographic Society. Moved by the space of seduction in which two worlds are crossed and reinvented, it illustrates the various profiles and multiple actions of Stradelli in different disciplines.