The shell of the turtles: Centro Prodh and human rights organizations in search of truth and justice 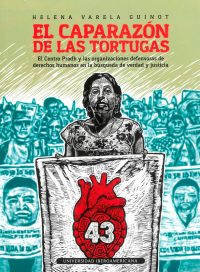 The shell of the turtles: Centro Prodh and human rights organizations in search of truth and justice

This book investigates a little addressed aspect of the Ayotzinapa case, which is the role played by civil society organizations in the accompaniment processes of direct and indirect victims. The case of the Miguel Agustín Pro Juárez Human Rights Center (Centro Prodh) is emblematic and allows testing the theories and methodologies of the study of civil society organizations. The Prodh Center played a fundamental role in maintaining and coordinating two different strategies: one of accompaniment for the victims (which allowed the construction of community social capital, key to maintaining mobilization) and another of relations with the authorities (which allowed, in a gradually, get some results). Between the oblivion that the government tried to impose ("historical truth") and the memory that the collective of fathers and mothers demanded, the organizations that defend human rights, and especially the Prodh Center, managed to be the bridge, the link between two spheres that they were totally separate, far away from each other. This has been a key factor in keeping the fight for truth and justice active for so many years.