The social and political thought of Bergoglio and Pope Francis 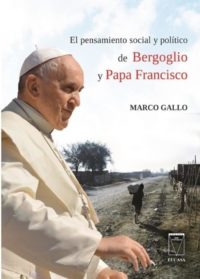 The social and political thought of Bergoglio and Pope Francis

This work is a journey through the thoughts of Pope Francis, from the beginning of his priestly life up to his pontificate. With a thorough selection of Jorge Mario Bergoglio’s texts, speeches and homilies, first as the Provincial of the Jesuits, then as the Rector of the University of San Miguel, afterwards, as the Archbishop of Buenos Aires and, finally, as the Pontiff, this book highlights the existing continuity between the writings of the seventies and the “pontificate of tenderness and mercy”, as it has been defined by well-known voices. Readers are offered a review on the social and political thoughts of the first Latin American pontiff, which address the poor and on the practice of politics to construct the common good. The prophetic anger on Lampedusa at the “globalization of indifference” is the same as that shown in Constitution Square in Buenos Aires, at human trafficking and slave labour. Bergoglio’s humanist thoughts, centred on the defence of the human person, also reveals the richness of the Church’s thought, little known and distorted by cultural stereotypes.