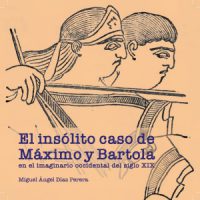 From the perspectives of various actors, the history of these children who were found in an enigmatic city of Guatemala, or perhaps bought in El Salvador, in the 19th century is reconstructed. Máximo and Bartola were considered “authentic Aztecs” and as such they were the object of spectacle in circuses; his story deserves to be disseminated to think racism critically and contribute to the construction of more egalitarian societies. This audiobook is part of the collection of works that ECOSUR produces for people with visual disabilities.