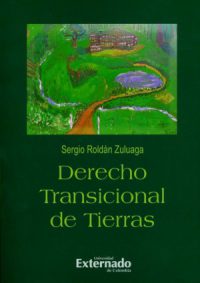 What is the role of agricultural law in Colombia? This essay asks such a question constantly. Agricultural law has evolved from food production and land access for peasants – towards the regulations of various actors in mining, agribusiness, tourism, environmental services, energy, among others. The use of land and its effects on the sustainability of natural resources broadens the framework of the intervention of agricultural law towards an integral land law capable of providing answers to global warming. The essay maintains that the role of the State is to arbitrate rural conflicts. It is the dynamic application of law which conveys justice in the territories by pondering environmental, social, economic and cultural variables. In the case of Colombia, who seeks to overcome a prolonged armed conflict, it is a transitional land law that observes the causes of conflict and provides corrective measures designed by transitional mechanisms to prevent their reproduction and thus promote local and national reconciliation. The book studies the UN Resolution (2018) which recognized peasants as subjects of special protection; it illustrates the historical omissions of the State and the risks posed by the inefficiency in its regulatory role; it analyzes the effects of armed conflict on the peasants who are victims and the restorative justice approach applied by the Truth, Justice, Reparation and Non-Repetition System; It proposes a collective and symbolic reparation model that deepens territorial peace and social dialogue initiated by the Territorial Approach Development Programs (PDET, for its acronym in Spanish) so that Land Law meets the goals of transitional justice.