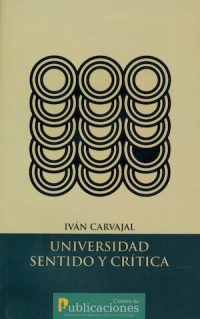 Hernan Malo Gonzalez argued that the university, as the "seat of reason" must be critical, and that within this, the self-criticism of reason and the university itself must be exercised. This is the central topic of the investigation undertaken by Iván Carvajal that culminates in this book: a critical inquiry regarding the purpose of the university in our time, as a result of its ability to maintain itself or to be to democratic public space, open to the multiplicity of knowledge, dialogue and debate. With this aim, the author reviews the "mission of the university"—in the sense given by Ortega y Gasset to this phrase—from the second half of the last century, to current attempts at reform.