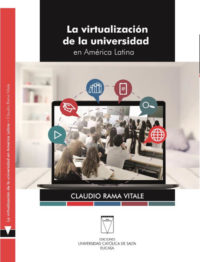 This is a fundamental book to understand the paths that digital disruption is taking within the university world. In this revised and expanded edition, the author delves into the topic of the new socio-economic dynamic, focusing on the digital irruption, and examines the impact these processes have on higher education in Latin America. This research unveils the effects of these phenomena on the transformation of university systems, particularly, in traditional distance learning, here defined as the “prehistory of this modality”. It also explores the new economic logic imposed by virtual learning, with the emergence of not only new forms of access but also new geographical and student sectors, and the development of a new IT pedagogy within the framework that is also changing the traditional logic of universities.

The author has been awarded with numerous distinctions, among which we can mention seven Honorary Doctorates granted by different universities, an Honourable Mention by the National Open and Distance Learning University of Colombia, and the Uruguayan Literary Award, among others.