VALUE DIMENSION OF SCIENCES. TOWARDS A POLITICAL PHILOSOPHY 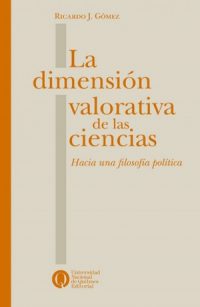 VALUE DIMENSION OF SCIENCES. TOWARDS A POLITICAL PHILOSOPHY

Against the conservative versions of science, Ricardo J. Gómez states that scientific practices and theories are loaded with different types of values, not only truth, simplicity, predictability, consistency, rigour and accuracy but also economical, social and ethical values typical of the political context in which the investigation has taken place. The author shows that none of what was described before affects the logic and objectivity of sciences, on the contrary it enhances them. This books proposal is a philosophy of science strictly political because the author considers the values of social context in scientific investigation as part of sciences. Ricardo J. Gomez states that this philosophy of science is politically responsible because it does not stand in neutral position before every context in the interest of being objective.