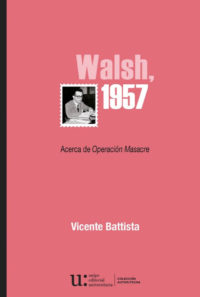 “One of the executed men is alive” is one of the best remembered phrases in 20th-century Argentine literature. Rodolfo Walsh heard it at a bar on the night of December 18, 1956, and following these words whispered by his friend, he started an investigation that forced him to leave his home and his work and change his identity for months. The result of this leap in the dark was Operation Massacre (1957), a book that –like 19th-century classics– was originally published in installments by a weekly paper. In this book, Vicente Battista examines Walsh’s life (1927-1977) from one end to the other in search of answers to one of the biggest mysteries behind his work: how can a police fiction writer who had publicly supported the coup d’état against Perón decide to risk his life by reporting the crimes committed by the Revolución Libertadora, and ends up as an intellectual icon for revolutionary Peronism. Walsh, 1957 is a chronicle of this metamorphosis, but it is also a text that delves into exploring the links between Operation Massacre and Facundo by Sarmiento, placing the story of these executed men within the context of the Argentine police novel and even wondering about the sense of writing literature in critical times.