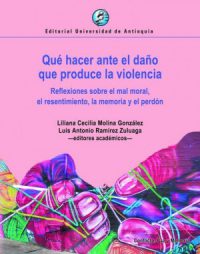 Understanding some of the ways in which victims handle the damage caused by the armed conflict – among which forgiveness can be an alternative – to try to recompose the injured moral and social ties is the intention of What to do in the face of the damage caused by violence. Reflections on moral evil, resentment, memory and forgiveness.
The book presents some points of views from different disciplines to the question proposed by the title; For this reason, he goes to topics such as the idea of justice, personal testimonies, daily resistance, moral evil, memory, people’s ties with the territory, unofficial actions undertaken by the victims or the representation of the absence through the art.
The work proposes that the questions regarding forgiveness are not limited only to the relationship of a victim with his material or direct aggressor, but also involve a process in which all the conditions that made the damage possible are questioned. Then, to “forgive” there should be a more general will, not merely individual, and not only of the groups that work in defense of the rights of the victims; also from other groups and from society in general.